The city that was built on seven hills…

San Francisco has 43 named hills, and as we mentioned in one of our earlier Five Facts posts, the total number of hills in San Francisco was recently announced to be 53. Now that’s a lot of hills. What makes some of these hills really interesting is that, San Francisco is one of 20 American cities that claim to have been built on seven hills. (Source: Wikipedia)

In the first three editions of Pinpoint: Seven Hills of San Francisco, we have covered Russian Hill, Telegraph Hill, Nob Hill, Rincon Hill, Mount Sutro and Twin Peaks, respectively. You can read the earlier parts by clicking the hyperlinks below.

In the fourth and last edition of this Pinpoint series, we will be inspecting Mount Davidson and later in the post we will briefly talk about the near future of GGU Social.

With an elevation of 928 feet, Mount Davidson is the highest natural point in San Francisco. It is located on the south of the geographical center of San Francisco—which is Twin Peaks, as you probably already know if you’re a dedicated fan of #SmarterEverySunday posts.

Aside from its height, Mount Davidson is also well known with the 103-foot concrete cross perched on the peak of the hill. The site of the cross serves as a yearly Easter service when the cross is illuminated. Below is a photo from an earlier Easter sunrise: 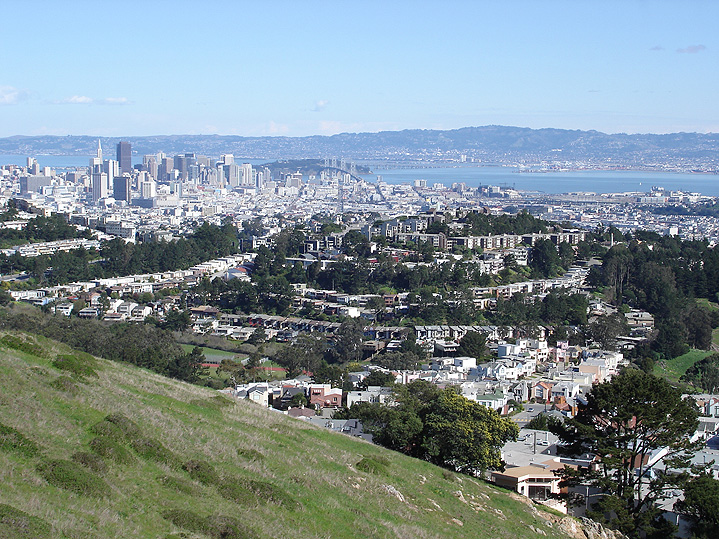 It’s debatable whether or not the view you’ll get from the top of Mount Davidson is better than the one on Twin Peaks; however, it’s still worth noting that the hill offers a beautiful view from the top and the mountain is not a hard one to climb.

The near future for GGU Social

Starting this week, we will be re-posting our #SmarterEverySunday posts on social media to help all of our readers catch up with the current content for a couple of months. We will keep on bringing you weekly social updates as well as delivering some exciting news about the couple of fun projects we have been working on with our  #SocialWednesdays posts. Meanwhile, we are planning to work on some visuals on our website as well as strengthening our social media profiles.

We have started planning a social gathering event to host towards the end of June. We are hoping to present you an entertaining party. We will let all of our readers and soon-to-be fans about the details when the time comes. We are also planning to introduce you to some more friendly contests with smaller giveaways like t-shirts, etc.

And last but not least; as you may have suspected from our earlier posts, we are hoping to bring some more fun to the San Francisco campus of Golden Gate University with a gaming tournament. Contribute in the questionnaire below if you haven’t already, and keep reading GGU Social if you don’t want to miss out on the fun!

We are always checking our e-mails and we encourage you to e-mail us at ggusocial@ggu.edu with any questions you may have as well as the events, photos and ideas you would like us to share with the community!